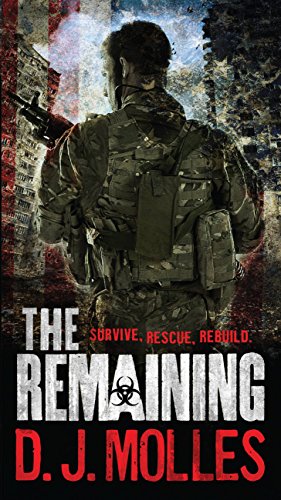 The first volume in the bestselling series, now in a special edition with the bonus novella The Remaining: Faith.

A SOLDIER’S MISSION IN A RAVAGED WORLD: SURVIVE, RESCUE REBUILD.

In a steel-and-lead-encased bunker twenty feet below ground, a soldier waits for his final orders.

On the surface, a bacterium has turned over 90% of the population into hyper-aggressive predators, with an insatiable desire to kill and feed.

But now the day has come when he must open the hatch to his bunker, and step out into the chaos . . .

FAQ: Should I read The Remaining series before the Lee Harden Series?

Answered by a fan:

“While Harden is a great continuation of The Remaining series,

it’s an excellent book for new readers to jump right in. We Remaining

backstory to really appreciate what’s going on. Molles did an amazing

going too far in the weeds. Once a new reader finishes this they can

easily jump into the back story. That will hold them up until the next

"I personally believe that you can gauge how good a book is by how long it takes you to read, this book has to go down as being one of the quickest, if not THE quickest,I have ever read. I usually confine my reading to bedtime, but I was deliberately finding time throughout the entire day. I enjoy post apocalyptic fiction, but not Zombies, so I took a chance having read most of the reviews, and it's true what they say about it not being like a typical stereotyped Zombie read, it's much more down to earth. Quite frankly it's pointless me describing the outline of this book, because it's been done in numerous different ways from reviewers on here, I simply couldn't add anything new. Read the most helpful positive and other 5 star reviews, because they are, in my opinion, spot on."
-Amazon Reviewer
"I wish I could rate this book higher than 5 stars. It deserves at least an 8 in my book. It was just that good. From the first sentence I knew I was a goner. I was instantly sucked in and once I started I could not stop until I finished. I literally felt as though I was in the book, and trying to survive with Captain Lee. I could just see everything happening as though it was playing out right before me. I will tell you, if you don’t like heart pounding, adrenaline rushing, hanging off the edge of your seat books, then step away. If you don’t want a book to make you yell, get frustrated, and emotions going haywire, step away. I did yell a few times, and one part I cried like a baby. It’s expected to feel these strong emotions in a book like this, because you can’t help but put yourself in the situations the characters face. I found the story-line very interesting and not once did I know what would happen next. Nothing happened like I thought it would and everything changed in the blink of an eye. But honestly, how could things always go according to plan when the world has ended? All I can say is, you have to read this book. It’s so good and I even gifted a copy to my BFF just so she would read it. I told her you have to experience the awesomeness! And it’s true. This is a book I will re-read again and again. I can’t wait to dive into book 2 and see how Captain Lee’s journey will continue. Highly recommend reading this!"
-Amazon Reviewer
"I could feel my adrenaline pumping during the close calls. It seems like Lee just can’t catch a break. I would recommend this book if you’re interested in the post apocalyptic scenario... maybe Covid lays dormant in your body until it flares up again and causes mental deterioration to the point of being like a zombie. If so, good luck out there in the coming years."
-Amazon Reviewer
Return to books