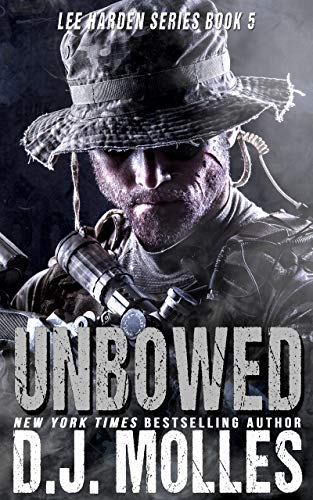 The United Eastern States has fallen.

Lee Harden and a band of survivors have escaped President Briggs’s invasion force. Their only options are to attack Briggs while his forces are delayed on the east coast…or admit that they’ve been beaten, and go into hiding.

For Lee Harden, the decision seems obvious. But as disparate forces, factions, and loyalties begin to converge under the pressure cooker of all-out civil war, Lee is forced to confront not only insurmountable odds, but also the darkest parts of himself that he has left buried in the years since this all began.

"The Harden series keeps getting better! The battle between man, man and the infected is always stepping up. You never want to stop reading!"
-Amazon Reviewer
"Action and angst. Betrayal and build up. Unbowed takes us up to that final edge of the overall main storyline and leaves us hanging by our fingertips for that final rush down the spiral of Lee vs Briggs. DJ Molles has crafted yet another masterful story in the Lee Harden universe."
-Amazon Reviewer
"The Lee Harden series is one of the best series I have ever read and can't get enough of the way the writer puts words to print. I highly recommend this series and anything D. J. Molles creates. But be prepared to love some of the characters, be shocked by the action which is non stop and really not a predictable story line. You have a divided country, a rogue wrongly installed president, trouble with invaders from our southern border and the worse PRIMALS going around destroying humans and constantly evolving, divided loyalties, surprise allies and of course the hero Lee Harden who I hope lives forever in all future writings. An exciting literary treat."
-Amazon Reviewer
Return to books