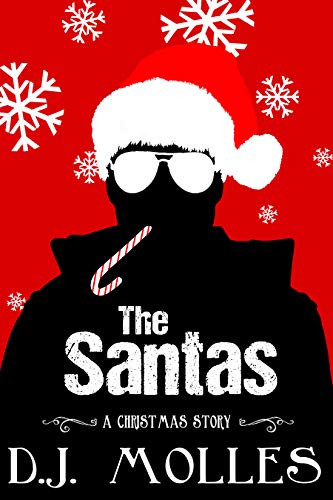 The Santas: A Christmas Story

He just found his boss, Nick—the Santa for Charlotte, North Carolina—murdered in an apparent random act of violence.

A former cop, Tucker is overcome with an intense need to find out who murdered Nick, and why.

Luckily, The Organization quickly sent a replacement Santa, but he requires training.

Somehow Tucker has to manage to deliver Christmas to his assigned region, train the new Santa, and uncover the mystery of who killed Nick, all while he struggles to patch things up with his crumbling family.

...And there are only 5 days left until Christmas

"I am not one to have much Christmas spirit. I bah humbug like the Grinch and don't really enjoy the holidays. Mr. Molles wrote an exciting Christmas story that really speaks to me. Thank you Mr. Molles. I loved it."
-Amazon Reviewer
"This was an absolutely FANTASTIC read! Not only is it packed full of action and suspense, but it has all the soul and spirit of Christmas! D.J. Molles is an incredible talent. 𝐃𝐢𝐞 𝐇𝐚𝐫𝐝 𝐝𝐨𝐞𝐬𝐧'𝐭 𝐡𝐨𝐥𝐝 𝐚 𝐜𝐚𝐧𝐝𝐥𝐞 𝐭𝐨 𝐓𝐡𝐞 𝐒𝐚𝐧𝐭𝐚𝐬! This is a true Christmas Story!"
-Amazon Reviewer
"And just like that a new tradition is born. A must read for Christmas, every year. Who knew DJ could break away from the savage world of The Remaining to write a Christmas story that will certainly tug on those heart strings? There were moments throughout that will grip you and catch you off guard as the story unfolds and comes back around to the true meaning of why we come together at the darkest time of the year to celebrate this thing called Christmas. Shine a light folks and Merry Christmas!"
-Amazon Reviewer
"Renewed my childhood faith in the magic of Christmas. I had a rough year as we all did...my husband of 21 years had a massive stroke. He can no longer speak or use his right hand. And I lost my job to corona. Things have been feeling bleak. I thought this would be a dark comedy. I wasn't even going to put up a tree. Then I read this book. Thank you Mr. Molles you have saved Christmas for us! We are putting the tree up tonight and we are going to celebrate the light this year."
-Amazon Reviewer
"I had mostly given up on finding a Christmas book that wasn't totally cheesy and predictable. This book was different, new thoughts and unexpected story line. So nice for Christmas 2020!"
-Amazon Reviewer
"I do enjoy the other books DJ Molles has written so I of course had to grab this one. I was intrigued on plot synopsis. Completely involved with Tuck in the first chapter, and it only gets better. It's full of action, and heart warming moments. I will reread this no matter what time of year. My husband loved this one as well, our 14 year old daughter is currently reading it and our 11 year old son will read it next. It brings true meaning back to the season, remember shine a light. The best Christmas story in a long time."
-Amazon Reviewer
Return to books