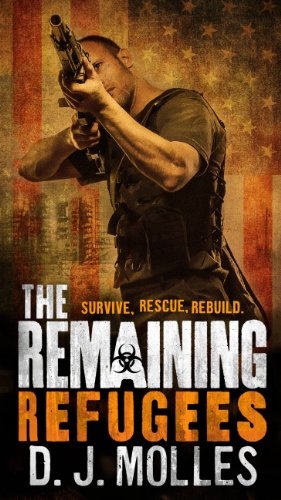 This is the third book in the bestselling Remaining series, telling a gritty tale of survival, perseverance and fighting to get back what has been lost.

A SOLDIER’S MISSION IN A WORLD GONE TO HELL: SURVIVE, RESCUE, REBUILD.

He has fought the fight, and run the race.

But the enemies never stop coming, and the race has no finish line.

It has been three months since Captain Lee Harden found the survivors at Camp Ryder. With winter looming, Lee is on the verge of establishing Camp Ryder as a hub of safety and stability in the region. But not everyone agrees with Lee’s mission . . . or his methods. Growing tensions between camp leadership are coming to a head, and as Lee struggles amid the dissension and controversy, new revelations about the infected threaten to destroy everything he has worked for.

"A strong continuation of the series, as things continue to fall off the deep end while balancing on a thread. It continues the narrative while retaining my attention and causing me to flip through the pages. I'm a slow reader, but with these books I read pretty fast."
-Amazon Reviewer
"TOTALLY blew me away. I think this is the best book so far of the three. But I may have thought that about each of the previous books too 😉 D. J. Molles just keeps surprising us time after time; book after book. When I think I can't get any more engrossed in a series, the next book comes out. I hate spoilers, so I will just say this...I CAN NOT BELIEVE THE ENDING!!! It picks up IMMEDIATELY at the end of Book 2. I love the way each book is just a continuation of the previous book. Not a lot of time elapsed (story-wise) if at all."
-Amazon Reviewer
"I rarely write reviews of kindle books but D.J. Molles needs recognition for this achievement. I first thought this was a normal trilogy, bought the first book, then hours later the second and third. I hope this series of books goes on forever. No-one ever seems to explore how mankind might actually survive long term after something as devastating as the FURY infection. It is intriguing reading about how zombies could actually happen in real life. It is exciting to learn tactics of surviving and intertwined are real believable relationships and people you end up caring about. With a few minor editing points these should become bestsellers in printed version and a series of magnificent films. Oh dear I am gushing but it is days since I finished and I am still going over the story line and trying to figure out what happens next..."
-Amazon Reviewer
Return to books