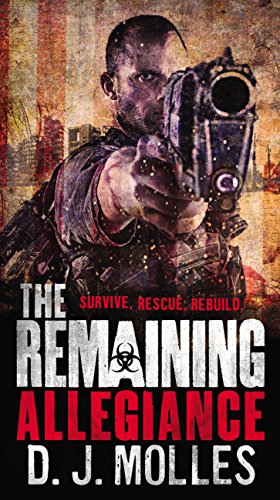 This is the fifth book in the bestselling The Remaining series, telling a gritty tale of survival, perseverance, and fighting to get back what has been lost.

Lee and a group of survivors continue to struggle to survive while rebuilding an America devastated by a bacterium - one that has turned 90% of the population into a ravenous horde.

Through an overwhelming storm of pain and adversity Captain Lee Harden has fought and survived. But his mission continues.

Recovering from his wounds, mental and physical, he must rally his companions at Camp Ryder and push back against the still swarming hordes of the infected that threaten to extinguish an already devastated society.

"All I can say about the Remaining series is that it continues to improve on some of the best books I've ever read. DJ Molles has proven himself as a terrific writer to watch, who really should be a household name. The story of Lee Harden and his band of survivors is gripping from start to finish. It gets unbearably tense at times, particularly towards the end as the stakes get higher and higher. I thought partway through the novel how great a film series this would be, but then I realised the huge number of terrifically realized characters and the intricate plot would be better suited to a HBO series, akin to a zombie Game of Thrones. The characters are completely believable and heartbreakingly human. There's one scene towards the end where Lee, normally an emotional rock nearly breaks down which is terrifically written and arguably Molles's best writing to date. But don't get too attached to characters, as there are some shocking deaths I did not see coming."
-Amazon Reviewer
"Another phenomenal entry into the series with everything in a world gone crazy becoming more fractured and untethered. I am so excited to see how D.J. Molles begins to thread each story line back together to either give us the "happy" or what can pass for happy, ending we all desire for Captain Harden, or watch as the world around him crumbles to dust. This series is like a damned speed addiction! Not sure if my heart rate dipped below 140 for the entire book! Keep it up!"
-Amazon Reviewer
"This 5th installment of the Remaining saga deals out hammer blows of action with plenty of twists and turns we Molles fans have come to expect. This is one of my favorite books of the series because of the masterful pauses between moments of intense action that allow us to better see into the minds of the characters and that help to ratchet up the suspense. I don't agree at all with some reviewers' complaints of the story not moving forward. Let's not get greedy. We are in the hands of a master storyteller here, and a great much happens in this book to resolve past questions, widen the playing field in some ways and narrow the options in an important way. I simply love the author's way of allowing this story to unfold. This book is an adrenaline rush."
-Amazon Reviewer
Return to books