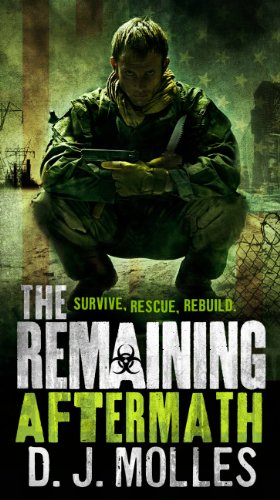 This is the second book in the bestselling Remaining series, telling a gritty tale of survival, perseverance, and fighting to get back what has been lost.

A SOLDIER’S MISSION IN A WORLD GONE TO HELL: SURVIVE, RESCUE, REBUILD.

Nothing has gone according to plan.

To Captain Lee Harden, Project Hometown feels like a distant dream and the completion of his mission seems unattainable.

Wounded and weaponless, he has stumbled upon a group of survivors that seems willing to help. But a tragedy in the group causes a deep rift to come to light and forces him into action. In the chaos of the world outside, Lee is pursued by a new threat: someone who will stop at nothing to get what he has.

"I think this was the first series of books I've read where I've written the reviews back to front! From the last book to the first! This isn't because I read them like this, obviously this would be silly, but because I just couldn't stop I between books! In fact in places I could hardly breath! Better than the walking dead and that's saying something. Keep them coming! I never want these to end.....ever!"
-Amazon Reviewer
"This is the brilliant second book of the series The Remaining. The author goes straight into the second book where the first book left off - no 'several months later' rubbish. The pace is fast and unrelenting - I literally couldn't put it down. The writing is very good and flows through the story, allowing you to become completely entrenched with the characters."
-Amazon Reviewer
"I would recommend this book to anyone, even if you usually aren't the 'zombie' type. These are not brainless drooling zombies, these are humans forever damages by a vicious bacteria. It doesn't feel like reading science fiction, it feels like reading a 'potential scenario #78 for how the end of the world may come to pass."
-Amazon Reviewer
Return to books