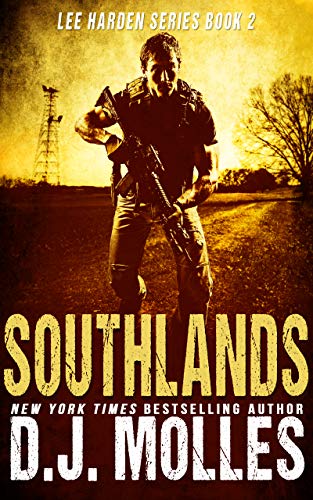 THERE WILL BE BLOOD.

After being sequestered to a bunker to recover from his wounds, Lee Harden is finally going topside with his fellow Project Hometown Coordinator, Terrence “Tex” Lehy. Lee wants to ally the UES with Texas, in order to combat the threat of a powerful oil cartel to the south. But Tex’s methods raise serious questions, and Lee quickly discovers that Texas has its own set of problems.

In the Fort Bragg Safe Zone, the conflict with the Lincolnists is rapidly escalating. Master Sergeant Carl Gilliard has just returned, and he’s intent on destroying the Lincolnists, using whatever means is necessary. Angela is caught in the middle, unable to reconcile her sense of civil morality with her desire for justice.

One thing remains certain: before there is peace, there will be blood.

"Honestly, this series is such a page turner and so addictive! The books are just non stop action but at the same time through DJ Molles superb storytelling have developed intriguing characters within a fabulous plot that weaves a complex tale of power and survival. Absolute superb stuff! I have waited so long in anticipation for this book and it did not disappoint! In fact Southlands is even better than the first book in the Harden series in my opinion! Now I need to twiddle my thumbs and wait again while DJ does his thing! "
-Amazon Reviewer
You ever have on of those days where nothing goes your way and everyday just seems to drop on you like a sledgehammer in which you want to just shrivel up and cry...SHUT UP AND SUCK IT UP BUTTERCUP!!! Captain Harden does it everyday in the series. 2 steps forward 5 steps back but he keeps moving forward with the odds stacked against him. Lead, follow or get out of the way...in the apocalypse the sheeple are food and hunters hunt the monsters.How good is this series...The entire series is impossible to put down. Its so good you crave for the next book, like the zombie craving fresh meat. So don't delay and start reading.
-Amazon Reviewer
"A lot of twists and turns in this book. I laughed at some points, cried at other, screamed a few times. All I can say is that there aren't many authors who illicit such strong reactions from me, but DJ Molles has done it again. Another excellent book."
-Amazon Reviewer
Return to books