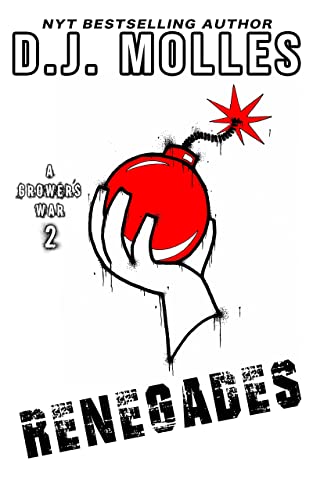 The nation is a powder keg, and Walter Baucom is striking sparks.

Caught in the middle of feuding resistance factions and a Coalition that will stop at nothing to track them all down and wipe them off the face of the earth, Walter finds himself taking on a desperate mission to save his father, and rescue a resistance fighter that he was forced to leave behind.

"Great follow up to The Purge of District 89. Molles really keeps up the pace while adding depth to the characters and fleshing out the story. Some questions are answered, new questions are raised, and the tension builds throughout the story right up to the cliffhanger ending. Starting book three right away and looking forward to it."
-Amazon Reviewer
"Renegades was phenomenal, if I had to use one word to describe it. Renegades was a sequel that delivered new source material, new characters with motives that were impossible to guess, and built upon the characters from the first novel in a way that made the reader identity with them even more than before. Walt is a character that is extremely easy to identity, because he's just an average everyday American, thrust into a life and death situation without any chance to think about it. This story makes you ask questions of yourself, like would I be able to sacrifice the way that Walt and all the other rebels do? Or would I be a coward, hiding out of fear, unable to rise up because of the fear or pain and death? Renegades is extremely thought provoking, extremely action packed, and I guarantee you won't be able to put it down."
-Amazon Reviewer
"I finished this book in less than 12 hours. Once I started it, I couldn't put it down. Mr. Molles is a writer with a lot of talent and the ability to tell a great story. I recommend this book to everyone. Full of action."
-Amazon Reviewer
Return to books