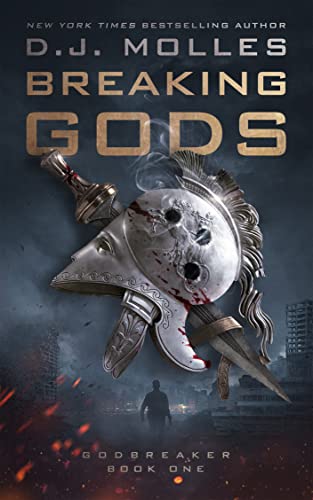 In the beginning, the gods destroyed the world.

Since then, the demigods have been using humanity to fight an endless civil war. Humans dutifully slaughtering other humans, battle after battle. For years, Perry McGown has made his living off the spent ammunition from those bloody battlefields.

But Perry has a secret.

He should be fighting the war instead of cleaning it up. Luckily, his fellow crew members don’t ask a lot of questions, because if anyone found out, he’d be executed.

However, an incident in a barroom goes too far, landing Perry behind bars and sentenced to death.

Through a flurry of gunfire and blood, Perry finds himself on the run with two of his least favorite people: a girl named Teran who does ask too many questions, and a gleefully violent ex-legionnaire named Stuber.

While being pursued by a ruthless demigod, Perry is forced to confront demons from the past. but ends up uncovering truths about his heritage that have been buried for decades.

The more Perry learns, the more dangerous his journey becomes.

Because the truth about Perry could break the gods.

“This new world DJ has created is beyond anything you'll have read before. Completely original, and impossible to put down. If work and sleep weren't a factor, I'd have read this in two days, tops!”
-Amazon Reviewer
“Breaking Gods is one of those books I couldn’t put down. Molles filled the pages with gritty, intense action that drove the story to a satisfying conclusion and left me eager for more.”
– Jason Anspach, bestselling author of Galaxy’s Edge
“Leave it to DJ Molles to change the genre with a breakneck action novel that had me turning the pages while thinking, why the hell didn’t I write this!”
—Nicholas Sansbury Smith, NYT and USA Today Bestselling Author of the Hell Divers and Extinction Cycle series
“Breaking Gods is a thrilling blend of military, science fiction, post-apocalyptic, and fantasy. The whole book is a masterful paradox of genres that shouldn't blend together, but they do. And the result is a story that is both unrelentingly, entertaining, and engaging.”
-Amazon Reviewer
Return to books